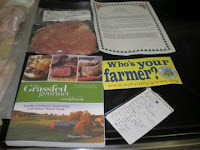 My first meat CSA delivery arrived last week-last Saturday. I'd love to say I wasn't disappointed, but in a way I was. I was excited to have fresh healthier meat in my kitchen, along with a cookbook and a newsletter, but disappointed in the amount available. As I understood it the amount of meat I received is suppose to feed 2 people 3 times a week for a month. What I received instead was enough meat to feed 1 person 3 times a week for a month. At least that's what it looks like. Maybe we just eat a lot of meat here in my house....I thought we didn't. Let me give a perfect example of what I'm talking about... among the variety of meats I received in the icebox there was one pork chop. I looked through the rest of the meat for another, but only found one. Say I wanted to cook pork chops one night how would this one pork chop be divided between two people and still be 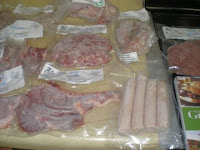 filling? Would I have to add larger side dishes? What if the second person is a 6 foot 1 inch tall man? Would he really be satisfied with half a pork chop? Would I, in order to satisfy him, have to go buy another pork chop at the regular grocery store?Would this defeat the purpose of joining the CSA? Who would get the CSA pork chop and who would get the other? I'm not sure why, but this one pork chop really bothered me... still does. It also bothered me when I saw the 4 tiny ribs. I'm new to the CSA thing, but I was hoping that if they give an estimate of how many people their meats can feed they would at least make an effort to make sure it feeds two people as closely as possible. Two people---give me two pork chops. It makes sense doesn't it 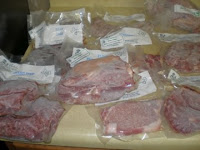 ? I emailed the very nice lady in charge of the CSA that evening, but have yet to receive a response. This is not a bad thing. They are very busy, but I am curious what her response will be. As for the other meats they all seemed satisfactory. I'm happy that the animals are grass fed, are free range and aren't injected with hormones. I'm not sure how long I can afford the price for the amount of meat I receive though. Maybe this month was slow. Maybe next month will be different. I took a few pictures of what I received. I'll download them later and post them. I also wrote down a list of the types of meats I received, but seem to have misplaced it. It is here somewhere. When I find it I will post it too. 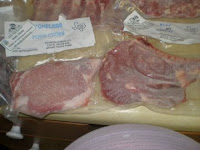 I searched online for more place to find organic coupons and came upon something I thought was rather funny. Organic coupons were being sold on ebay. That's right sold on ebay. Now isn't the purpose of coupons to save money? So why would a person spend money to save money on organic food. For example, if you have a coupon that saves you a dollar off the product, why would you pay 99cents plus shipping cost for this coupon. You aren't saving anything. Naturally most of these offers had no bidders, but every-now-and-then I saw a few. Of course these were for offers of multiple coupons in one bid, plus free shipping. This makes a bit more sense, but still I would worry about the coupon expering before it arrives. What do you think? Would you buy coupons on ebay?
Posted by Unknown at Saturday, December 13, 2008 No comments:

Shopping for groceries today was hard. Running low on money I had to grab the only organic item I could, MILK. Everything else has to be non-organic. If things keep up like this I may not be able to even buy organic milk. I spent the other day looking for Organic coupons (as much s I hate using coupons) to online only to find out that because I have a MAC computer many of the coupon online programs wont let me download coupons. This upset me. I guess my only option now is to call individual companies and ask them to send mail me coupons. Its a hassle but it helps, well except with Horizon. They only send you one coupon and its 55cents and there was this rule that I could only due it once a month. I hope that's changed since I last called because that just means they're going to loose my buissness being so stingy.
Posted by Unknown at Thursday, December 11, 2008 1 comment:

For those of you who have been reading my blog and still wonder, "what is a CSA?" the Local Harvest website defines it like this:

A CSA, (for Community Supported Agriculture) is a way for the food buying public to create a relationship with a farm and to receive a weekly basket of produce. By making a financial commitment to a farm, people become "members" (or "shareholders," or "subscribers") of the CSA.

I hope this helped.
Posted by Unknown at Monday, December 08, 2008 No comments:

I joined the CSA

I did it. I joined the CSA. Actually I joined 2. One will deliver meat to my door once a month and the other I will have to pick up veggies once a week starting in March. I'm a little nervous. I hope it goes well.
Posted by Unknown at Thursday, December 04, 2008 No comments: